This homework assignment was to take my favorite amendment and to illustrate it using just words.  I tried for the look of a ballot since the 19th Amendment gave me, as a woman, the right to vote.  This is such an important amendment to me because it gave women an actual voice in how their lives should be governed.  And these days, it is especially important for women to use their vote to protect their rights and the rights of their daughters and grand daughters from those who want to take away their right to govern what they can and can not do with their bodies.

Unfortunately, I can remember back to the late 60’s and early 70’s when blank books were all the rage as gag gifts. Printed on faux leather in gold, they were the size of a large hardback book and were usually titled “Everything I Know About …” with the blank being filled in with anything from their professional to SEX. With my father being in the speciality advertising business, I saw plenty of these.

When this assignment was given I had a couple of chuckles over it. First, was from the distant memory of the blank books of my youth. The second, is that while I would love to be a published author, this is not exactly the way I envisioned my first book coming about. However, this has given me some insight on how to create a cover when the time comes.

First, step was to come up with a premise for a blank book. 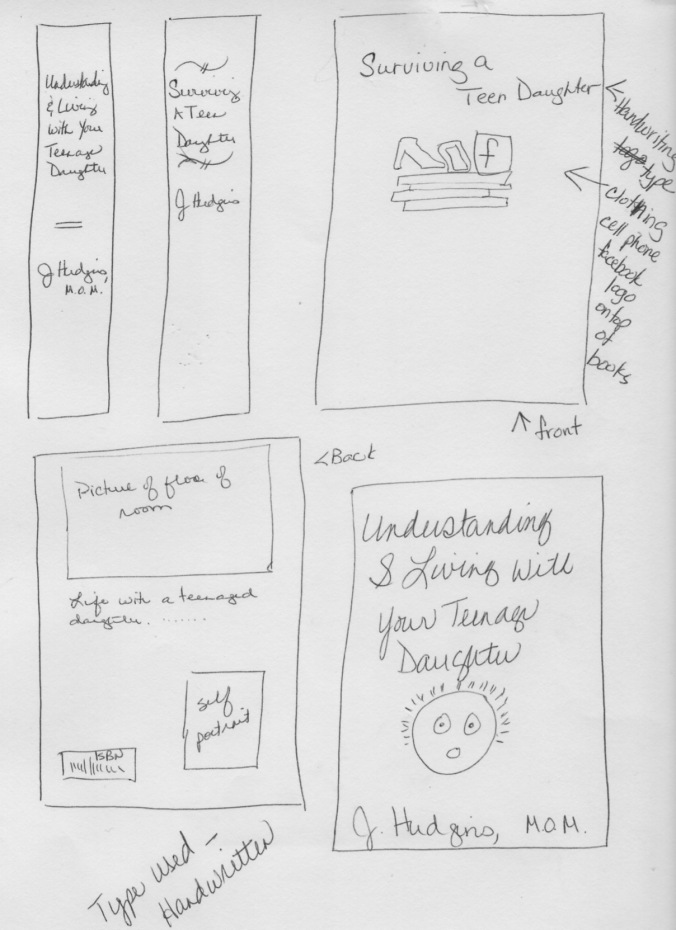 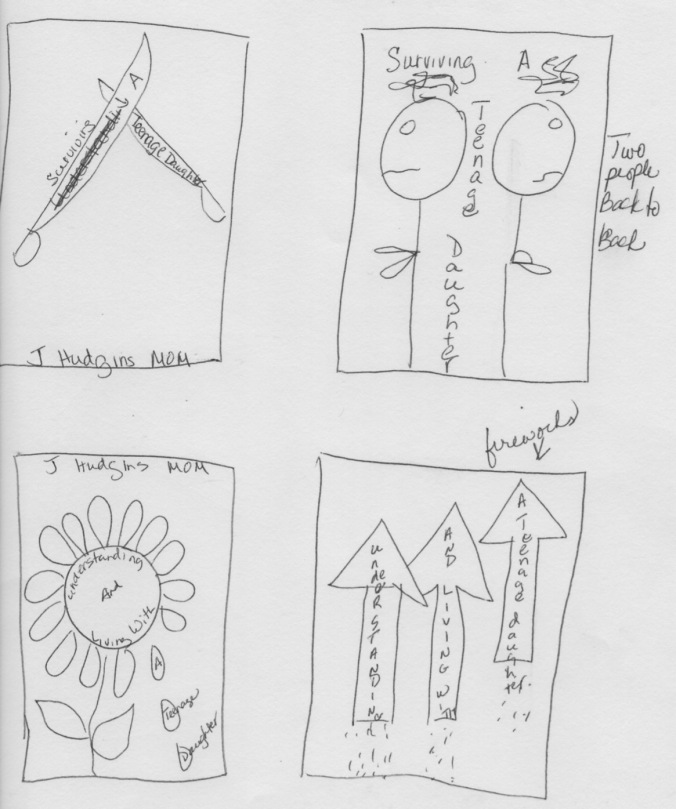 I went with the idea of “surviving” a teenage daughter. I am not sure I really did. I think I just existed during those years.  In designing my cover, I took a picture of my youngest and then of myself and did some ‘playing’ in Photoshop on them. 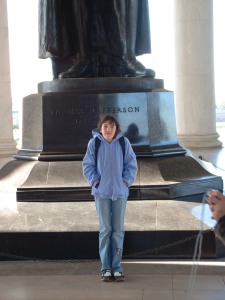 The picture of my daughter is one of the rare pictures she actually has let me take of her.  I usually have to use her older sister as my ‘model’.  And for myself, I had her take a picture of me (hated that).

I then selected us out of the background and copied to a transparent screen.  I then used the Poster Edges filter on each of us to make it look cartoonish.  I then copied that image and used a liquify filter and mask on one to create the particles exploding off.  On the other copy I used a mask and masked out particles.  Believe me, as a mother, you feel you are coming to pieces half the time.  I sat us in an adversarial position to each other so it looked like we were fighting.  Her expression gives than impression.  But actually she was fighting me taking a picture, but we were in Washington, D.C. for the day so she could do a report on Thomas Jefferson (we are related by marriage to him).  At that time we lived in Raleigh and I was with the airlines, so I flew both daughters up to Washington for the day.  She made 100 on the project. 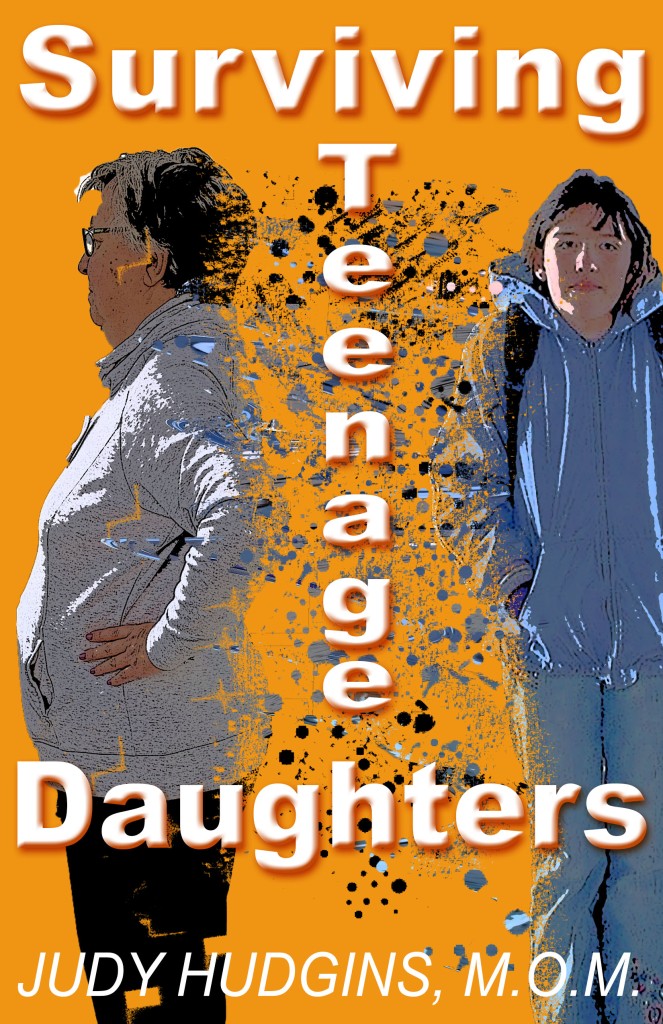 So this is what my cover turned out to be.  I used a bright orange to attract attention on the shelf (being in the library all the time helps with that).

Then came the back cover…

The font I used are all in the Arial family.  Arial Black for the title, Arial Italic for my name and then Arial for everything else.  I am pleased with the outcome on my end for the book cover.  We shall see what my instructor says.

When I first saw this project, my eyes rolled up into my head.  Only a man would figure out how to take a frozen turkey and cook it in 90 minutes. Even my youngest daughter, who will often go hungry rather than cook, would never think about doing something like this.  Therefore, when thinking about the project, I immediately set my target audience to men, particularly men who watch car races or like cars. 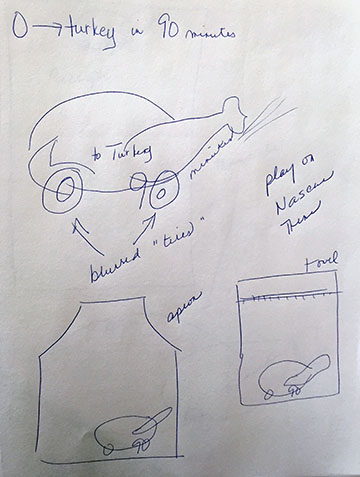 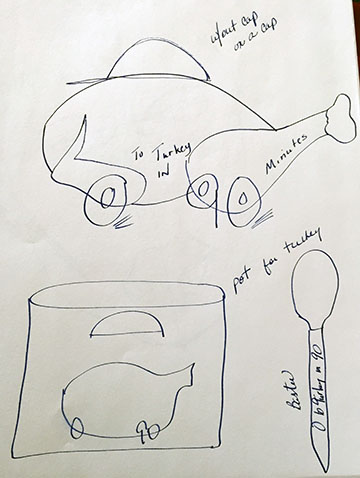 Although I was suppose to have 20 sketches, I knew what my ‘idea’ was almost immediately and unfortunately, I was so stuck on that one idea I couldn’t think of anything differently.

My audience was going to be the male “Nascar” audience and wanted to also do accessories or ‘tools’ to go along with the project.  My goal was to have everything, from the pot to the roasting pan all geared with the same theme.

So this is my logo for the “0 to Turkey in 90 Minutes”.  I wanted the “0”‘s to be like wheels and turn the turkey into a car.  I kept the colors masculine to appeal to the male audience.

With this whole theme in mind, I went to Dollar Tree and purchased pot holders, roasting pan, baster, towel and oven mitt.  I bought an apron from Joann’s.  I then created the logo and ironed on those items or used sticker paper on the non-cloth items to show the logo.  I also created a magnet for the refrigerator in a 4 X 6 inch size.  I had my oldest daughter model the apron for the booklet I created.

Here are my following pages I created… 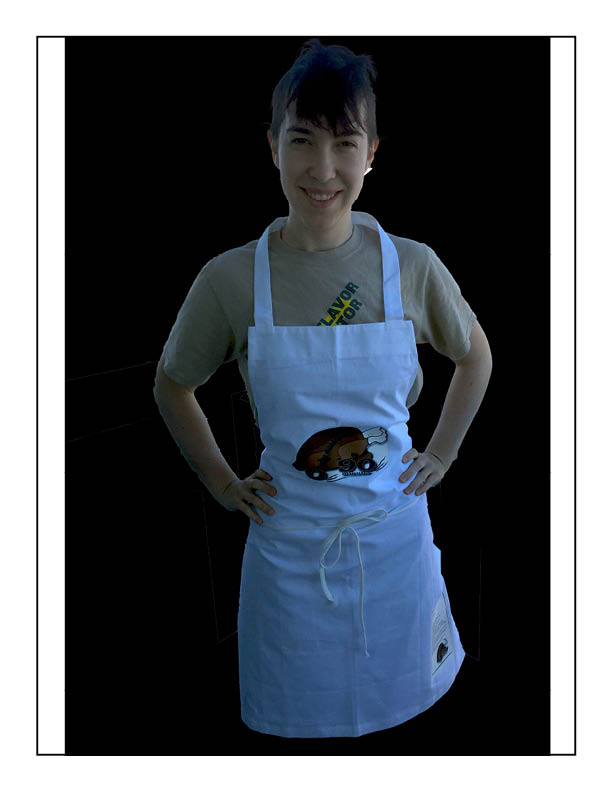 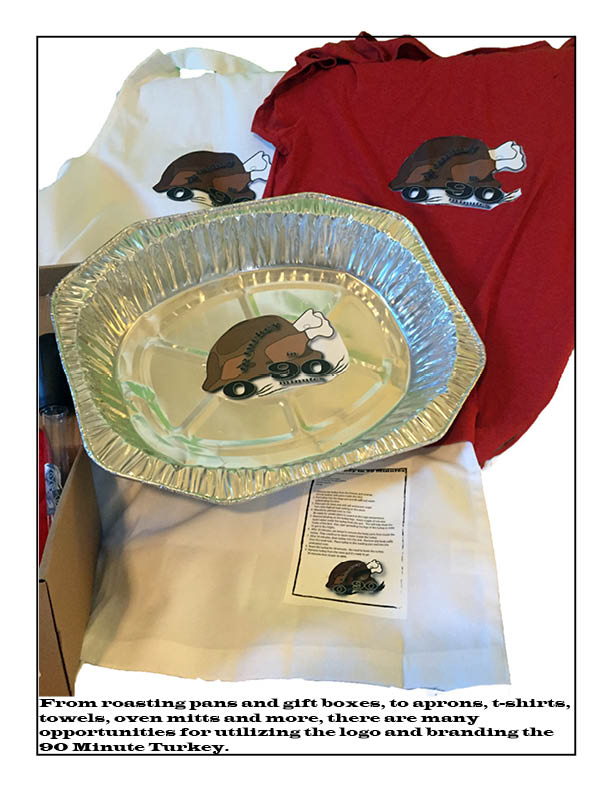 apron with recipe on the front 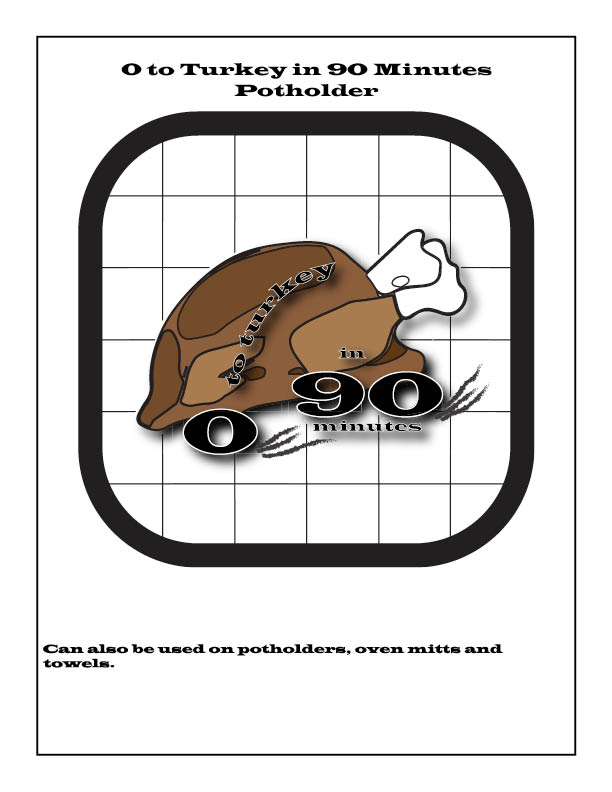 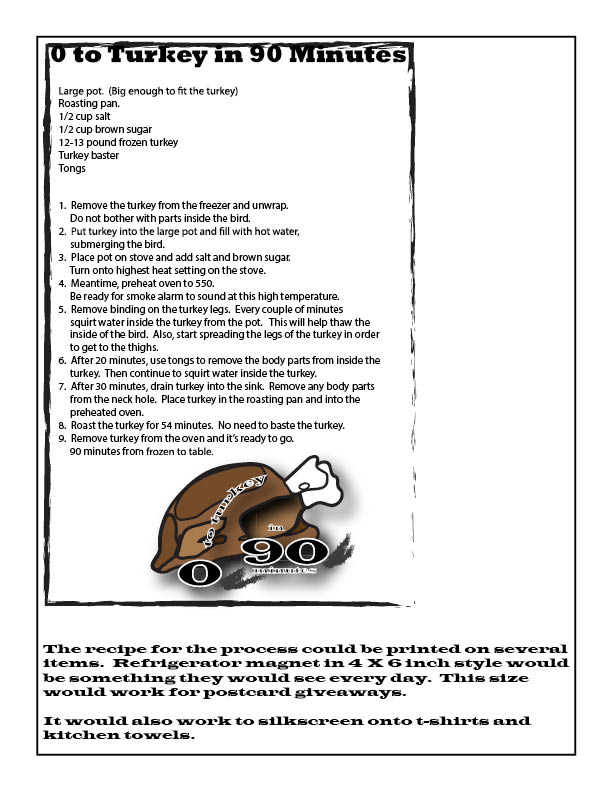 This was a fun project and I enjoyed the whole process, thinking about what I could put the logo on. I had the idea for mouse pads, post cards, business cards and the actual pot to put the items in rather than a box.

This year is dedicated to becoming more professional with my creative endeavors, but written and visual.  Two of my classes this semester are really geared toward my end goal, putting my art out into the world in a real way.  And to that end, we are having to create a professional blog to showcase our work.  This should be a very interesting semester.